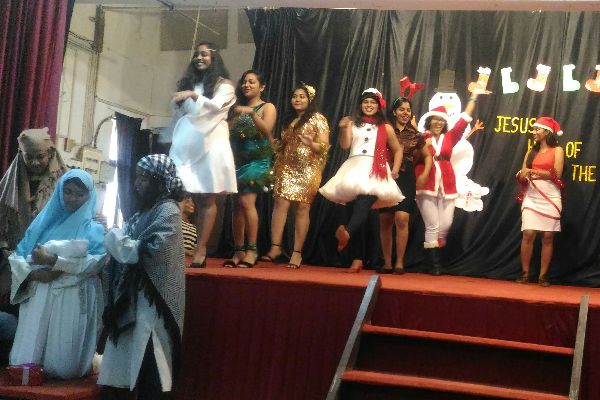 The Christmas spirit was ushered in with fervour and gaiety at Carmel College of Arts, Science and Commerce for Women, Nuvem, Goa.  The Christmas programme for students was held on 20 th December 2019 in the college auditorium. The well-curated programme comprised of off-stage and on-stage events which the students conceptualized and participated in with gusto. The beautiful backdrop highlighted the Christmas theme, viz. ‘Jesus, Hope of the World.’ Sr. Aradhana A.C., Principal, spoke about the joy of giving. Sr. Lizanne A.C. appreciated the efforts of the students in conveying the Christmas message so creatively.

The programme began with the striking lines by compere and staff member Andrea who reminded the gathering that, ‘Christmas is not about giving of presents. It is about the opening of your heart.’ This was followed by the Christmas novena.

The first on-stage event was the live crib and carols staged by B.Sc. students. As a group of students sang carols like ‘We Three Kings,’ the characters came alive on stage. Next up was F.Y.B.A. with a dance performance to the song ‘Jingle Bell Rock.’ Preferring mime as their form of expression, B.Com. students showed how a girl gives up the money she had saved, in order to save the life of an accident victim. The Christmas fashion show was presented by S.Y.B.A. As carols played in the background, students dressed as the characters stepped onto the stage. Some of these were Frosty the Snowman, Rudolph the red-nosed reindeer, and Christmas Tree. The last performance was by T.Y.B.Sc which presented a dance.

For the finale Xena Bal, dressed as Santa, strew the hall with a shower of sweets. With several spot prizes thrown in, the students had a gala time.