The Department of Economics, Carmel College for Women, organised a webinar titled, “Revival of Responsible Tourism in Goa- Possibilities and Challenges” on 17th December, 2020 which was conducted via Google Meet. The Resource Persons were Mr. Ralph de Sousa, Chairman, The de Souza Group and Architect, Dean D’Cruz, Co-Founder, Mosaic.

Mr. de Sousa spoke about the hard-hitting impact of the pandemic on the households in Goa directly and indirectly dependent on Tourism and about the long road to recovery. Sustainability of tourism, he opined, is dependent on Goa’s natural beauty and culture which are it’s USPs.  He pointed out that these USPs are compromised by the beautification projects which lead to concretization. He suggested that the opportunities in hinterland tourism are in providing homestays and in preserving the natural identity of the villages which can give unique experiences to the visitor, rather than promoting it through artificial development projects.

Architect D’Cruz noted that the carrying capacity of tourism in the State had been reached and that the pandemic is an opportunity to create a new direction in tourism where it is revived with a vision to benefit the locals and their livelihoods. It is the people who should decide how their resources can be used and the Government should play the role as facilitator in the process. As responsible citizens we do need to push the agenda to create an environment for clean and green tourism in Goa, he expressed. He suggested models of tourism which encourage art, music, health and creativity in a form which preserves the Goan ethos.

The speakers also interacted with the students and responded to their queries. The webinar had students across colleges in Goa as participants, along with faculty members.

In her opening remarks, Dr. Rovina Fernandes, Head of the Department of Economics, briefed the participants about the objectives of the webinar series. The Officiating Principal, Dr. Aldina Branganza, commended the Department  for initiating the webinar series and addressed the participants on the benefits of such deliberations. Ms. Tabitha Fernandes and Ms. Lauren Fernandes, students of SYBA, Carmel College, anchored the proceedings.   Asst. Professor Rivya Dias summed up the proceedings in her Rapporteur’s report while Asst. Professor Ms. Glancy Borges  proposed the vote of thanks.

This webinar was a part of the webinar series initiated by the Department of Economics of the College to analyse the impact of the pandemic on the Goan Economy. 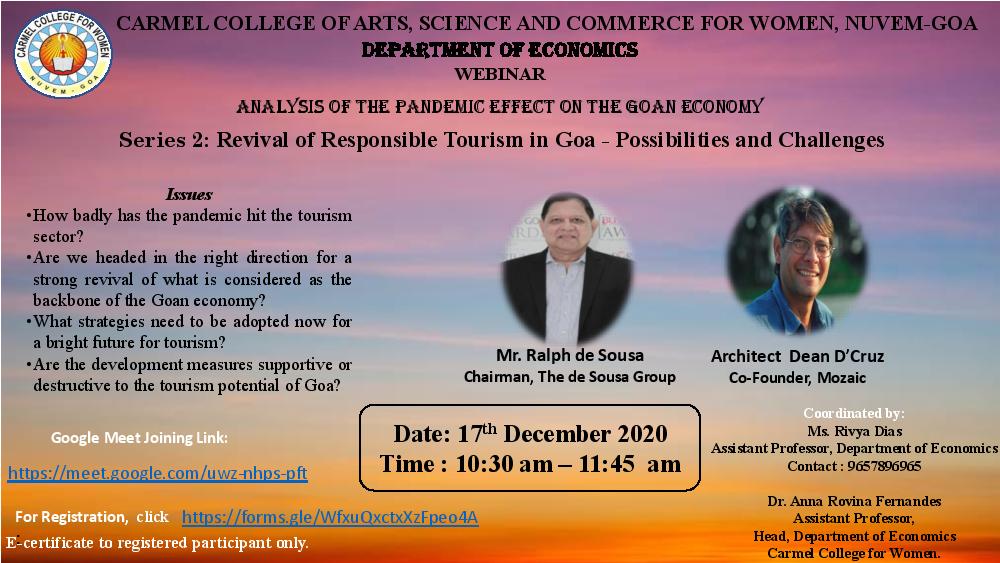 Panelists discuss the possibilities and challenges for tourism revival.