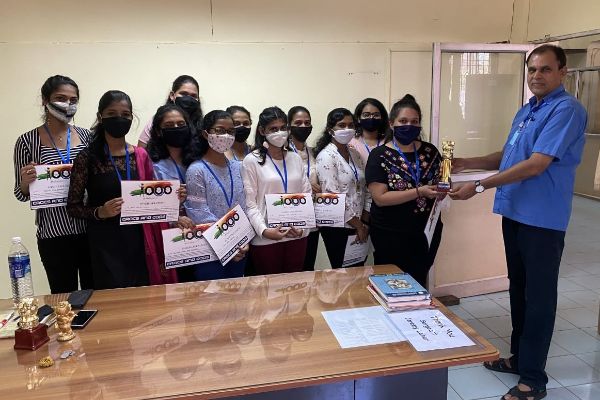 Carmel College for Women has the honour of securing the First Place among 8 competing colleges in the United 1000 Project, a community project by the Crocs and Cops Community Policing Unit at Verna Police Station. The College was assigned the project, “Improving  Health Facilities for Verna Police Jurisdiction”. It involved multiple efforts by the students in research, analysis, community outreach and pitching for investor support to improve health care facilities.   The project spanned from October 1st to December 31st, 2019 and the 13 students who participated in the project clocked in 100 certified hours in their efforts to connect the community with the police. This project was a part of the United 1000 Project coordinated by Founder, Crocs and Cops Community Policing Unit at Verna Police Station and Community Policing Hostage and Crisis Negotiator, Mr Anish Quenim, in partnership with the Houston Police Community Affairs Division, Houston Texas U.S.A, which was coordinated on behalf by Sergeant Jeremy Lahar. The Project Report was handed over by the students in January 2020.

In recognition of their efforts and community policing  contributions ,  Deputy Superintendent of Police,  Shri Sandesh Chodankar felicitated the students with medals and certificates and were handed over the  winner’s trophy.

A total of eight colleges were involved in eight various projects shortlisted as part of an evidence based community policing analysis for crisis negotiations. However the top three winners were Carmel College for Women, Nuvem which secured the first place, followed by Our Lady of Perpetual Succour Higher Secondary School, Cortalim in the second place and B.C.A batch of M.E.S College, Sancoale which secured the third place. The three institutions worked on improving community health care, youth and police partnerships and digital policing integration.