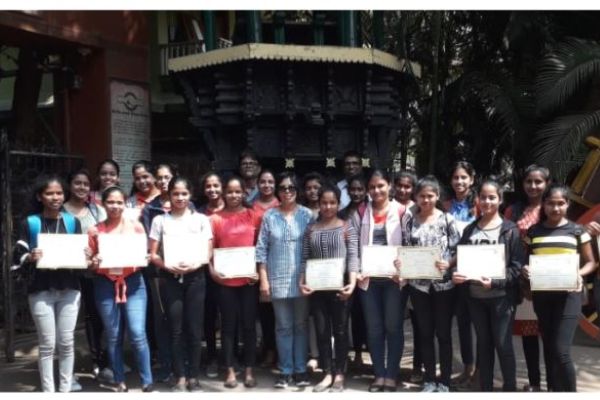 The Department of History in collaboration with Goa Chitra oraganized a one day workshop on Museology on 11 th February 2020, for the students of  Third Year History. The students were taken to Goa Chitra Museum at Benaulim. On arrival, the Curator of the Museum Mr Victor Gomes welcomed the students and gave them a gist of the museums.

The students were first taken to the Chakra Museum and were guided by Mr Peter. In this museum, there were different kinds of chakras/ wheels, carts and carriages acquired not only from Goa, but also from places like Gujarat, Rajasthan and Karnataka.

Then the students were taken to the pottery section, were they gathered first hand information of the different types of pots and farming tools used over a period of time. Eco-friendly baskets used for various purposes and fishing nets were also seen. The museum has also preserved the religious symbols of the predominant religions prevailing in Goa i.e. Christianity and Hinduism. This was seen in the Goa Chitra Museum

The Kruti Museum exposed the students to the furniture, clothing musical and medical instruments of our colonial past.

As a part of the workshop, the students were than taken to the angan– a seating area for a writing exercise. The students were instructed to go around the three museums i.e. the Chakra Museum, Chitra Museum and Kruti Museum and pick up any one object that caught their eye and write approximately sixty words on that object, which included the name of that object, its uses and a detailed description of the same.

Mr Colin an expert in linguistic skills and teacher at the American College- Goa , along with the Curator examined the work sheets of the students and pointed out the missing gaps which would than equip students in the future, to acquire  very important skills those of microfiction, labelling and description of artefacts. Mr Colin was very encouraging in his talk, giving the students an aura of confidence, which he said could be acquired only through the 3 Ps i.e.  Practice, Practice, Practice.

Mrs Leila Ribero Head of Department of History, who coordinated the workshop, proposed the Vote of Thanks, appreciating both the efforts of the Curator Mr Victor Gomes and Mr Colin.

The workshop which is very useful to the students in the future as a career option in the sphere of museums, ended with the distribution of certificates to the 24 participants and a group photo.